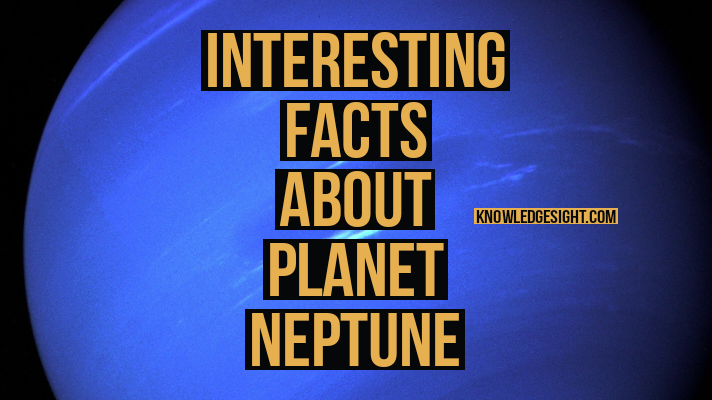 Neptune is named for the Roman god of the sea, who is identifi ed with the Greek deity Poseidon, a son of the Titan  Cronus (the Roman god Saturn) and a brother of Zeus (the  Roman god Jupiter). It is the second planet to have been  found by means of a telescope. Its discovery in 1846 was a  remarkable combination of the application of solid Newtonian  physics and a belief in a numerological scheme that later  proved to be scientifi cally unfounded. Neptune’s orbit is  almost perfectly circular; as a result, its distance from the Sun  varies comparatively little over its nearly 164-year period of  revolution. Although the dwarf planet Pluto’s mean distance  from the Sun is greater than Neptune’s, its orbit is so eccen- tric (elongated) that for about 20 years of each revolution  Pluto is actually nearer the Sun than is Neptune.

Neptune is almost four times the size of Earth but slightly smaller than Uranus, which makes it the smallest in diameter  of the four giant, or Jovian, planets. It is more massive than  Uranus, however, having a density roughly 25 percent higher.  Like the other giant planets, Neptune consists primarily of  hydrogen, helium, water, and other volatile compounds, along  with rocky material, and it has no solid surface. It receives less than half as much sunlight as Uranus, but heat escaping from its interior makes Neptune slightly warmer than Uranus.

The heat liberated may also be responsible for the storminess in Neptune’s atmo- sphere, which exhibits the fastest winds  seen on any planet in the solar system.

Neptune has 13 moons (natural satellites), only two of which had been discovered before the Voyager 2 space- craft flew past the planet in 1989, and a  system of rings, which had been uncon- firmed until Voyager’s visit. As is the  case for Uranus, most of what astrono- mers know about Neptune, including its  rotation period and the existence and  characteristics of its magnetic field  and magnetosphere, was learned from a single spacecraft encounter. In recent years new knowledge of the Neptunian  system has come as a result of advances  in Earth-based observational technology.

Neptune’s orbital period of 163.72 years means that by mid-2010 it will have cir- cled the Sun only once since its discovery  in September 1846. Consequently, astron- omers expect to be making refinements  in calculating its orbital size and shape  well into the 21st century. Voyager 2’s  encounter with Neptune resulted in a  small upward revision of the planet’s esti- mated mean distance from the Sun, which  is now thought to be 4,498,250,000 km  (2,795,083,000 miles). Its orbital eccen- tricity of 0.0086 is the second lowest of  the planets; only Venus’s orbit is more  circular. Neptune’s rotation axis is tipped  toward its orbital plane by 29.6°, some- what larger than Earth’s 23.4°. As on Earth,  the axial tilt gives rise to seasons on  Neptune, and, because of the circularity  of Neptune’s orbit, the seasons (and the  seasons of its moons) are of nearly equal  length, each nearly 41 years in duration.

nantly of hydrogen and helium. Near the

one-bar pressure level in the atmosphere,

these two gases contribute nearly 98 per-

cent of the atmospheric molecules. Most

of the remaining molecules consist of

methane gas. Hydrogen and helium are

atmosphere with most of its red colours

removed and so has a bluish cast.

Although Uranus’s blue-green colour is

also the result of atmospheric methane,

blue, presumably an effect of the pres-

ence of an unidentified atmospheric gas.

The temperature of Neptune’s atmo-

sphere varies with altitude. A minimum

bar. The temperature increases with

at a pressure of a hundred-billionth of a

bar, which corresponds to an altitude of

the one-bar level, and it remains uniform

above that altitude. Temperatures also

increase with increasing depth below the

where the pressure may reach five

megabars. The total amount of energy

radiated by Neptune is equivalent to that

of a nonreflecting sphere of the same size

with a uniform temperature of 59.3 K

Neptune is more than 50 percent

farther from the Sun than is Uranus and

so receives less than half the sunlight of

the latter. Yet the effective temperatures

of these two giant planets are nearly

equal. Uranus and Neptune each reflect—

and hence also must absorb—about the

same proportion of the sunlight that

reaches them. As a result of processes not

than twice the energy that it receives

from the Sun. The added energy is gener-

ated in Neptune’s interior. Uranus, by

contrast, has little energy escaping from

Prior to Voyager 2’s encounter, Neptune’s

only known moons were Triton, discov-

ered visually through a telescope in

William Lassell shortly after the discov-

ery of Neptune, and Nereid, discovered in

telescopic photographs more than a cen-

tury later in 1949 by American astronomer

moons to Neptune’s system. All are less

than half of Triton’s distance from

Neptune and are regular moons—i.e., they

that lie near Neptune’s equatorial plane.

These moons are probably synchronous

rotators; that is, their rotational and

orbital periods are the same.

Earth-based observations. These are

that are inclined at large angles to the

tances from Neptune lie roughly between

and 30 million miles), well outside the

Evidence that Neptune has one or more

rings arose in the mid-1980s when stellar

ally showed a brief dip in the star’s

brightness just before or after the planet

passed in front of it. Because dips were

seen only in some studies and never sym-

metrically on both sides of the planet,

scientists concluded that any rings pres-

ent do not completely encircle Neptune

but instead have the form of partial rings,

Images from Voyager 2, however,

revealed a system of six rings, each of

which in fact fully surrounds Neptune.

The putative arcs turned out to be bright

regions in the outermost ring, named

Adams, where the density of ring parti-

cles is particularly high. Although rings

also encircle each of the other three giant

planets, none displays the striking

clumpiness of Adams. The arcs are found

within a 45° segment of the ring. From

leading to trailing, the most prominent

Egalité 2, and Fraternité. They range in

Although the moon Galatea, which orbits

just planetward of the inner edge of

Adams, may gravitationally interact with

ily in such arclike regions, collisions

between ring particles should eventually

uniformly around the ring. Consequently,

it is suspected that the event that

supplied the material for Adams’s enig-

matic arcs—perhaps the breakup of a

small moon—occurred within the past

The other five known rings of

Arago, and Galatea, in order of increas-

ing distance from the planet—lack the

nonuniformity in density exhibited by

Adams. Le Verrier, which is about 110 km

to the relationship between the moon

Galatea and the ring Adams, the moon

of the ring Le Verrier. Each moon may

gravitationally repel particles near the

inner edge of its respective ring, acting as

Galle, the innermost ring, is much

broader and fainter than either Adams

or Le Verrier, possibly owing to the

absence of a nearby moon that could

Lassell consists of a faint plateau of ring m

that extends outward from Le Verrier about

is the name used to distinguish a nar-

edge of Lassell. Galatea is the name gen-

erally used to refer to a faint ring of

material spread all along the orbit of the

Neptune is the only giant planet that is

not visible without the aid of a telescope.

Having an apparent magnitude of 7.8, it is

approximately one-fifth as bright as the faintest stars visible to the unaided eye.

Hence, it is fairly certain that there were

no observations of Neptune prior to the

use of telescopes. Galileo is credited as

the first person to view the heavens with

a telescope in 1609. His sketches from a

few years later, the first of which was

saw Neptune when it passed near Jupiter

but did not recognize it as a planet.

Prior to the discovery of Uranus by

in 1781, the consensus among scientists

and philosophers alike was that the plan-

ets in the solar system were limited to

six—Earth plus those five planets that had

been observed in the sky since ancient

times. Knowledge of a seventh planet

others to suspect the existence of still

tus came from the mathematical curiosity

Some astronomers were so impressed

by the seeming success of Bode’s law in

explaining the distances of Ceres and

Uranus that they proposed the name

Ophion for the large planet that the law

told them must lie beyond Uranus, at a

In addition to this scientifically

Uranus provided actual evidence for the

existence of another planet. Uranus was

not following the path predicted by

Newton’s laws of motion and the gravita-

tional forces exerted by the Sun and the

agreed with the calculated positions of

Uranus for the respective time at which

each observation was made. It appeared

possible that the gravitational attraction

of an undiscovered planet was perturbing

the orbit of Uranus.

In 1843 the British mathematician

study to see if he could predict the loca-

tion of a more distant planet that would

to the astronomer royal, George B. Airy,

at Greenwich Observatory, but they

apparently were considered not precise

enough to begin a reasonably concise

of Adams’s efforts in Britain, began a sim-

ilar study of his own.

By mid-1846 the English astronomer

had expressed his opinion that the math-

ematical studies under way could well

lead to the discovery of a new planet. Airy,

proposed a search based on Adams’s cal-

culations to James Challis at Cambridge

examination of a large area of sky sur-

The search was slow and tedious because

Challis had no detailed maps of the dim

stars in the area where the new planet

was predicted. He would draw charts of

later to see if any had moved.

ing astronomers in his country that a

telescopic search of the skies in the area

he predicted for the new planet was not a

municated his results to the German

the Berlin Observatory. Galle and his

painstakingly constructed to aid in the

search for new asteroids. Galle and

d’Arrest identified Neptune as an

fied the next night that it had moved

relative to the background stars.

as a consequence of the planet’s enor-

mous distance from both Earth and the

means that the sunlight reaching its

moons and its upper atmosphere is

barely 0.1 percent as bright as that at

Neptune through the full thickness of

Earth’s atmosphere could not resolve fea-

tures smaller than about one-tenth of

Neptune’s diameter, even under the best

observing conditions. Most such obser-

parameters and searching for moons. In

objects by factors of 10–100 over earlier

Voyager 2 is the only spacecraft to have

encountered the Neptunian system. This

spacecraft and its twin, Voyager 1—both

launched in 1977—originally were slated

to visit only Jupiter and Saturn, but the

jectory the leeway needed for the

spacecraft to be redirected, with a gravity

assist from Saturn, on extended missions

to Uranus and then to Neptune.

Voyager 2 flew past Neptune and its

June and October of that year. It mea-

sured the planet’s radius and interior

rotation rate and detected its magnetic

field, determining that the latter is both

highly inclined and offset from the

planet’s rotation axis. It confirmed that Neptune has rings and discovered six new

moons. Neptune previously had been

systems, but Voyager’s images of the

winds seen in the solar system and several

large-scale storms, one the size of Earth.

Because Neptune was Voyager 2’s

to it than to any other planet during the

it to gather high-resolution images of the

precise measurements of its radius and

surface temperature. As of 2009, no future

missions to  Neptune are planned. 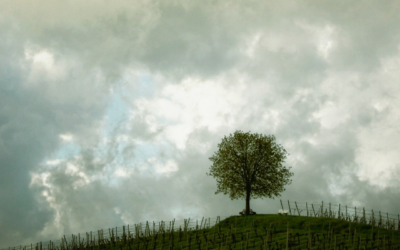 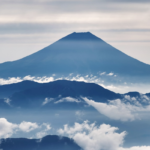